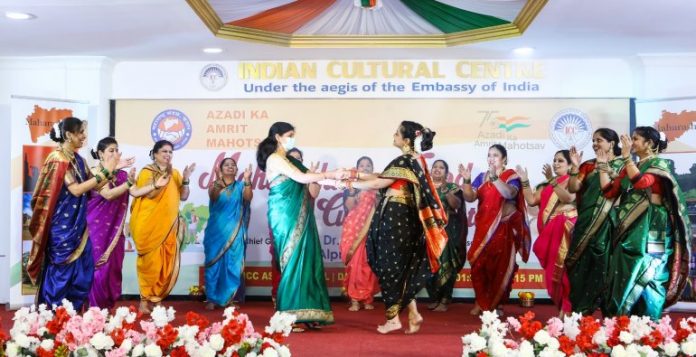 Ambassador of India to Qatar HE Dr Deepak Mittal and Dr Alpna Mittal were the chief guests. Only limited invitees from Embassy of India, apex bodies, officials from MMQ community were invited for the event considering the current Covid-19 protocol. The event was telecast live through social media for the rest of the MMQ members.

The guests were accorded with a grand traditional Maharashtrian welcome on their arrival and escorted by playing the traditional folk dance ‘Lezim dance’ by MMQ members. This was followed with National Anthems of Qatar and India followed by “Maharashtra Geet”.

During presidential address, Sanjay Patil elaborated the journey of MMQ since its inception 25 years back. He outlined the day’s events that were designed with the objective of preserving rich and diverse Maharashtrian culture through cultural performances and food cuisines from different parts of Maharashtra.

The ambassador inaugurated the paintings exhibition and the food stalls. The food stalls exhibition covered about 24 different delicious cuisines from almost every sub-region of Maharashtra.