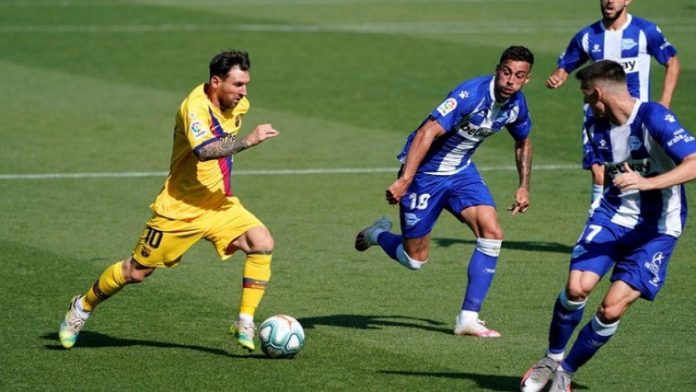 Lionel Messi should claim a record seventh La Liga golden boot after scoring twice in a 5-0 win over Alaves on Sunday as Barcelona ended their disappointing season on a more positive note.

Messi’s double takes his league tally to 25 goals for the season and puts him four clear of Karim Benzema in the race for the ‘Pichichi Trophy’ ahead of Real Madrid’s last game later on Sunday against Leganes.

“Today was very different,” said Messi. “We have taken an important step in terms of attitude and commitment and things can follow on from that. We have shown we can change.”

Unless Benzema runs riot against Leganes, Messi will finish as La Liga’s top scorer for a seventh time, pulling clear of Telmo Zarra’s six while playing for Athletic Bilbao in the forties and fifties. – Under-fire Barca sparkle –

This sparkling attacking display certainly gave a glimpse of what is possible when Messi, Suarez, Fati and the promising Riqui Puig find their rhythm but Napoli in the last 16, and potentially Bayern Munich in the quarter-finals, will offer a completely different test.

Setien has increasingly been putting his faith in youth and the 20-year-old Puig impressed again in midfield while 21-year-old Ronald Araujo gave a composed, albeit largely unchallenged, performance in defence Barcelona were three goals up before half-time and could have had more.

They hit the woodwork three times in the first 15 minutes as Puig and Arturo Vidal both rattled the crossbar before Messi’s curling shot hit the post.

Fati finally opened the scoring when Messi’s deflected cross looped up to the near post, where the 17-year-old was quickest to react.

Suarez spurned a one-on-one after a brilliant Puig pass and Puig was also involved in the second, weaving inside and teeing up Messi to stride through and finish.

Vidal went close with a flicked header from Messi’s cross before Suarez capped a superb move by heading in his 17th league goal after Jordi Alba had volleyed Messi’s pass across.

Another Puig through ball just before the hour allowed Semedo to lash in a fourth, only for Messi to have the last word with a smart finish on the half-volley.