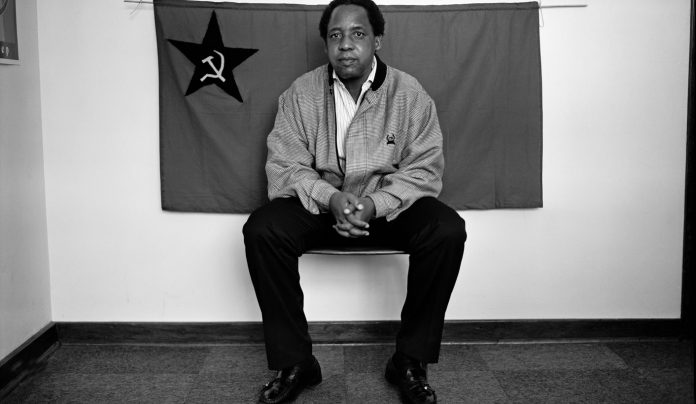 On this day in 1993, Chris Hani (born Martin Thembisile Hani), the Secretary-General of South African Communist Party and chief of staff of uMkhonto we Sizwe, the armed wing of the African National Congress (ANC), was assassinated. He was aged 50.

Hani was killed as as he returned home to the racially mixed suburb of Dawn Park, Boksberg (Johannesburg) by Januzs Walus, an anti-Communist Polish refugee who had close links to the White nationalist AWB.

With Hani was his daughter, Nomakhwezi, then 15 years old. His wife, Limpho, and two other daughters, Neo (then 20 years old) and Lindiwe (then 12 years old) were away at the time.

Hani was a fierce opponent of the apartheid government.

At age 15, he joined the ANC Youth League. As a student, he was active in protests against the Bantu Education Act. He worked as a clerk for a law firm. Following his graduation, he joined Umkhonto we Sizwe (MK), the armed wing of the ANC. Following his arrest under the Suppression of Communism Act, he went into exile in Lesotho in 1963.

Because of Hani’s involvement with Umkhonto we Sizwe he was forced into hiding by the South African government during which time he changed his first name to Chris.

He received military training in the Soviet Union and served in campaigns in the Zimbabwean War of Liberation, also called the Rhodesian Bush War. They were joint operations between Umkhonto we Sizwe (MK) and the Zimbabwe People’s Revolutionary Army in the late 1960s. The Luthuli Detachment operation consolidated Hani’s reputation as a soldier in the black army that took the field against apartheid and its allies. His role as a fighter from the earliest days of MK’s exile (following the arrest of Nelson Mandela and the other internal MK leaders at Rivonia) was an important part in the fierce loyalty Hani enjoyed in some quarters later as MK’s Deputy Commander (Joe Modise was overall commander).

In 1969 he co-signed, with six others, the ‘Hani Memorandum’ which was strongly critical of the leadership of Joe Modise, Moses Kotane and other comrades in the leadership.

In Lesotho he organised guerrilla operations of the MK in South Africa. By 1982, Hani had become prominent enough that he was the target of assassination attempts, and he eventually moved to the ANC’s headquarters in Lusaka, Zambia. As head of Umkhonto we Sizwe, he was responsible for the suppression of a mutiny by dissident anti-Communist ANC members in detention camps, but denied any role in abuses including torture and murder.[4] Many MK female operatives like Dipuo Mvelase adored Chris Hani for having protected women’s rights and caring about their wellbeing at military camps.

Having spent time as a clandestine organiser in South Africa in the mid-1970s, he permanently returned to South Africa following the unbanning of the ANC in 1990, and took over from Joe Slovo as head of the South African Communist Party on 8 December 1991.

He supported the suspension of the ANC’s armed struggle in favour of negotiations.