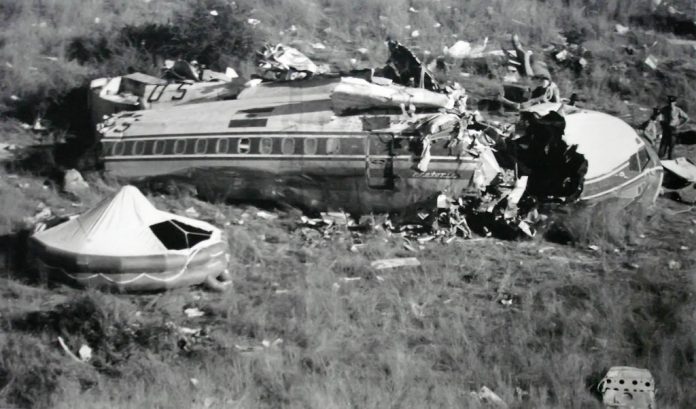 On this day in 1968, a Boeing 707 belonging to South African Airways (SAA), en route to London and only in use for seventeen days, crashed and exploded shortly after takeoff from Windhoek’s airport, killing 123 passengers and crew.

The first leg of the flight under Captain Eric Ray Smith from Johannesburg to JG Strijdom Airport, Windhoek, was uneventful. An additional 46 passengers embarked in Windhoek, and some airfreight was unloaded and loaded. It was a dark, moonless night with few if any lights on the ground in the open desert east of the runway, and the aircraft took off into what was described in the official report as a “black hole”.

The aircraft initially climbed to an altitude of 200m above ground level, then levelled off after 30 seconds and started to descend. Fifty seconds after take-off, it flew into the ground in flight configuration at a speed of approximately 502 km/h.

Two fires immediately broke out when fuel in the wings ignited after the crash. Although the crash site was only 5,3km from the end of the runway, emergency services took 40 minutes to reach the scene because of the rugged terrain. Nine passengers who were seated in the forward section of the fuselage initially survived, but two died soon after the accident, and another two a few days later, leaving a final death toll of 123 passengers and crew.

The investigation was complicated by the fact that the aircraft did not have a flight data recorder or cockpit voice recorder. These devices had become mandatory from 1 January 1968, but the airline’s inability to procure recorders meant that several SAA aircraft did not yet have the equipment fitted.

The official investigation concluded that the aircraft and its four engines were in working order — the primary fault lay with the captain and first officer, in that they “failed to maintain a safe airspeed and altitude and a positive climb by not observing flight instruments during take-off”. No blame was attributed to the third pilot, whose responsibility it was to monitor the radio, and who was unable to monitor the flight instruments from his position in the cockpit.