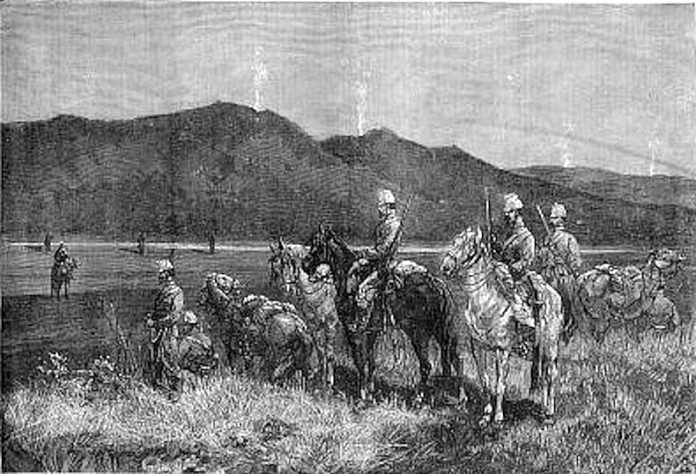 Before the French arrived, the Bey of Tunisia had begun a process of modern reforms, but financial difficulties mounted, resulting in debt.

The French presence in Tunisia came five decades after their occupation of neighboring Algeria. Both of these lands had been associated with the Ottoman Empire for three centuries, yet each had long since attained political autonomy.

Their advance to Tunis was rapidly executed. The Bey was soon compelled to come to terms with the French conquest of the country, in the first of a series of treaties.

These documents provided that the Bey continue as head of state, but with the French given effective control over a great deal of Tunisian governance, in the form of the Protectorat français en Tunisie.

In the decades leading up to the French incursion, Tunisia was a province of the declining Ottoman Empire that enjoyed a large measure of autonomy under the bey, Muhammad III as-Sadiq.

In 1877, Russia declared war on the Ottoman Empire. Its resulting victory in the Russo-Turkish War (1877–1878) triggered the dismemberment of large portions of Ottoman territory, including independence for several Balkan possessions and international discussions about the future of the North African provinces. The Berlin Congress of 1878 convened to resolve the Ottoman question. Britain, although opposed to total dismantling of the Ottoman Empire, offered France control of Tunisia, in return for Cyprus.

Germany, seeing the French claim as a way to divert French attention from vengeful action in Europe after the Franco-Prussian War, and little concerned about the southern Mediterranean, agreed to allow French control of Tunisia.

These discussions surrounding France’s role in Tunisia were kept secret from the Kingdom of Italy, which was deeply opposed to French intervention.

After their occupation, the French government assumed Tunisia’s international obligations. Major developments and improvements were undertaken by the French in several areas, including transport and infrastructure, industry, the financial system, public health, and administration. Yet French business and its citizens were favored, not to the liking of Tunisians. Their preexisting national sense was early expressed in speech and in print; political organization followed. The independence movement was already active before World War I, and continued to gain strength against mixed French opposition. Its ultimate aim was achieved in 1956.