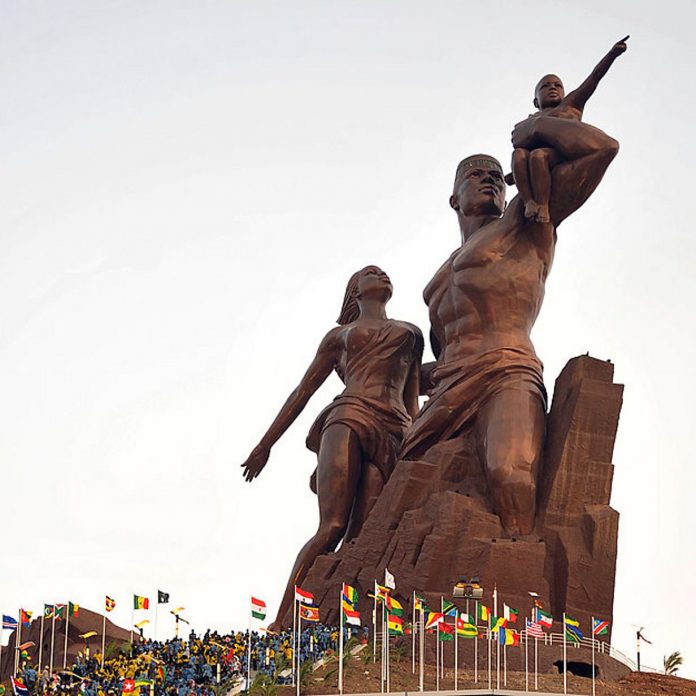 On this day in 2010, the African Renaissance Monument was dedicated in Senegal.

The 52 m (171 ft) tall copper statue, the tallest statue in Africa, is located on top of one of the twin hills known as Collines des Mamelles, outside Dakar.

The monument was unveiled in front of 19 African heads of state, including President of Malawi and the African Union, Bingu wa Mutharika, Jean Ping of the African Union Commission and the Presidents of Benin, Cape Verde, Republic of Congo, Ivory Coast, The Gambia, Liberia, Mali, Mauritania and Zimbabwe, as well as representatives from North Korea, and Jesse Jackson and musician Akon, both from the United States, all of whom were given a tour.

Built overlooking the Atlantic Ocean in the Ouakam suburb, the statue was designed by the Senegalese architect Pierre Goudiaby after an idea presented by president Abdoulaye Wade and built by Mansudae Overseas Projects, a company from North Korea.

Site preparation on top of the 100-meter high hill began in 2006, and construction of the bronze statue began 2008.

Originally scheduled for completion in December 2009, delays stretched into early 2010, and the formal dedication occurred on 4 April 2010, Senegal’s “National Day”, commemorating the 50th anniversary of the country’s independence from France.

The project attracted significant criticism due to its expense and perceived lack of cultural authenticity.

Construction
The project was launched by then Senegalese president Abdoulaye Wade who considered it part of Senegal’s prestige projects, aimed at providing monuments to herald a new era of African Renaissance.

It is a question of showing through a family drawn up towards the sky, the man carrying his child on his biceps and holding his wife by the waist, “an Africa emerging from the bowels of the earth, leaving obscurantism to go towards the light”.

The monument indeed represents an African family resolutely turned towards the North-West. The project of the monument was entrusted to the Senegalese architect Pierre Goudiaby Atepa, author “in particular” of the Door of the Third Millennium which overhangs the road of the Corniche.

The work was “drawn” by President Wade who owns 35% of the copyright, but the work was initiated by the famous Senegalese artist Ousmane Sow who has since withdrawn from the project following a disagreement with Abdoulaye Wade.