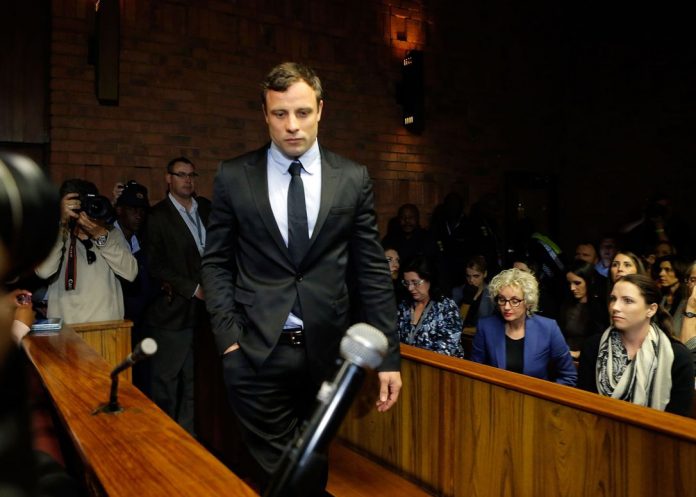 On this date in 2013, Oscar Pistorius, the double-amputee sprinter dubbed the Blade Runner, was charged in the Valentine’s Day slaying of his girlfriend at his upscale home in South Africa, a shocking twist to one of the feel-good stories of last summer’s Olympics.

Pistorius buried his face in the hood of his workout jacket as officers escorted him from a police station after his arrest in the shooting death of Reeva Steenkamp, a 30-year-old model who had spoken out on Twitter against rape and abuse of women.

Police said she was shot four times in the pre-dawn hours at Pistorius’ villa in a gated community in the capital, Pretoria. Officers found a 9 mm pistol inside the home and arrested Pistorius on a murder charge.

What sparked the shooting remained unclear, but police said they had received calls in the past about domestic altercations at the home of the 26-year-old athlete, who has spoken publicly about his love of firearms.

Pistorius made history in the London Games when he became the first double-amputee track athlete to compete in the Olympics. He didn’t win a medal but did make the semifinals of the 400 meters and became an international star.

After being charged, companies quickly removed billboards and advertising featuring Pistorius, a national hero in South Africa who also inspired fans worldwide with the image of his high-tech carbon-fiber blades whipping through the air.

Pistorius has had troubles in the past in his personal life, which often featured fast cars, cage fighters and women.

In February 2009, he crashed a speedboat on South Africa’s Vaal River, breaking his nose, jaw and several ribs and damaging an eye socket. He required 180 stitches to his face. Witnesses said he had been drinking, and officers found alcoholic beverages in the wreckage, though they did not do blood tests.