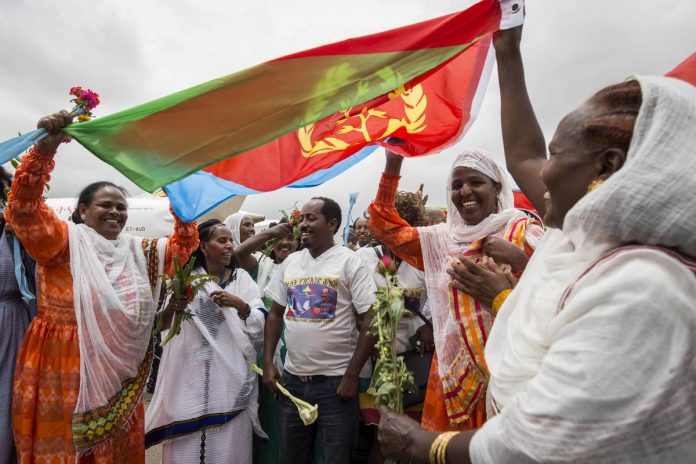 On this day in 1993, Eritrea officially declared independence from Ethiopia. Soon afterward, Eritrea joined the Organization of African Unity and the United Nations.

With the end of the 30-year liberation war on 24 May 1991, Eritrea had achieved its independence in practice, if not yet in law. At once, the newly formed Provisional Government of Eritrea (PGE) set about reconstructing the country’s devastated infrastructure, while building a rudimentary state apparatus to manage the transition to internationally recognized sovereignty.

The war had left Eritrea in ruins. Water and sewage systems in the towns barely functioned. The few asphalt roads had been torn up by heavy military vehicles. Port facilities in Massawa were badly damaged by heavy bombing after the city was liberated in February 1990. And the rail system was entirely dismantled, its iron rails used to make bunkers.

What remained of Eritrea’s light industry had not been maintained or modernized in a quarter century, and urban unemployment exceeded 30 percent of the economically- active population. Meanwhile, persistent drought had kept the rural population on the brink of famine. At the end of the fighting, fully 85 percent of Eritrea’s three million people depended on donated food aid. The World Bank estimated Eritrea’s per capita income at only $70-150, compared to $330 for the rest of sub-Saharan Africa.

On 21-23 April 1993, following a year of extensive popular education, organization and logistical preparations in which nearly 1,125,000 potential voters were registered, an independent Referendum Commission staffed by prominent Eritreans from wide-ranging backgrounds conducted a national referendum on Eritrea’s political status. More than 98.5% of those eligible participated at polling stations throughout Eritrea, in Ethiopia and Sudan, and as far as the Middle East, Europe, North America and Australia.

The balloting was monitored by the United Nations, the Organization of African Unity, the Arab League, the Non-Aligned Movement and representatives of more than a dozen countries, including Ethiopia. When the results were tallied, 99.8% of the voters chose sovereignty. Sudan, Ethiopia, Italy, the US and other countries with local diplomatic representation immediately recognized the State of Eritrea. On 24 May, the PGE officially declared Eritrea’s independence.

OTHER EVENTS OF INTEREST ON THIS DAY
1218: The Fifth Crusade leaves Acre for Egypt.
1887: Sultan Bargash of Zanzibar grants East African Association at East African harbors.
2016: Kaduna state in Nigeria declares a state of emergency due to ‘Tomato Ebola’, as moth destroys 80% of tomato crops.