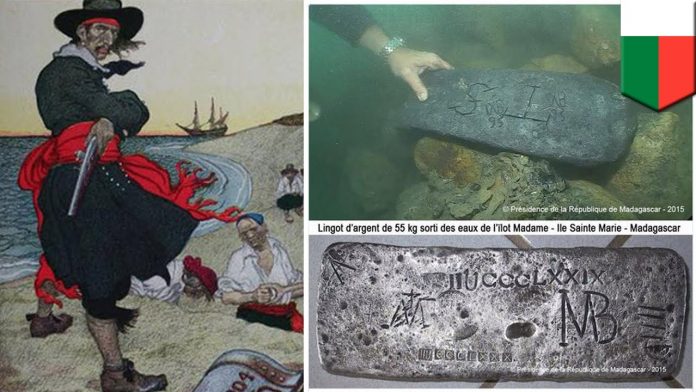 On this day in 2015, underwater explorers in Madagascar say they have discovered treasure belonging to the notorious 17th-Century Scottish pirate William Kidd.

A 50kg (7st 9lb) silver bar was brought to shore on the island of Sainte Marie, from what is thought to be the wreck of the Adventure Galley.

The bar was presented to Madagascar’s president at a special ceremony.

US explorer Barry Clifford says he believes there are many more such bars still in the wreck.

Capt Kidd was first appointed by the British authorities to tackle piracy but later became a ruthless criminal and was executed in 1701.

“Captain’s Kidd’s treasure is the stuff of legends. People have been looking for it for 300 years. To literally have it hit me on the head – I thought what the heck just happened to me. I really didn’t expect this,” Mr Clifford said.

“There’s more down there. I know the whole bottom of the cavity where I found the silver bar is filled with metal. It’s too murky down there to see what metal, but my metal detector tells me there is metal on all sides.”

The BBC’s Martin Vogl tweets that there is much excitement in Madagascar about the discovery and Mr Clifford’s team has no doubt that the discovery is genuine.

Who was Captain Kidd?
He is thought to have been born in Scotland’s Greenock or the Dundee area in about 1645.

He was appointed by the Crown to tackle piracy and capture enemy French ships, but turned to piracy himself.

In 1698, he looted the Armenian ship the Quedagh Merchant, which was apparently sailing under a French pass.

The Quedagh Merchant had been carrying satins, muslins, gold and silver.

Unfortunately for Kidd, the captain of the ship was an Englishman, and it is thought that a large amount of the cargo belonged to the British East India Company.

Capt Kidd was captured and brought back to London. He was found guilt of piracy and the murder of one of his crewmen during a row in 1697, and sentenced to death.

During his execution in Wapping in 1701, the first rope put around his neck broke, so he was strung up a second time. That rope also snapped, but the third one held.

Afterwards, his body was dipped in tar and hung by chains along the River Thames to serve as a warning to would-be pirates.

Legend had it that Capt Kidd hid much of his loot, which has prompted numerous treasure hunts around the world and inspired author Robert Louis Stevenson when writing Treasure Island.