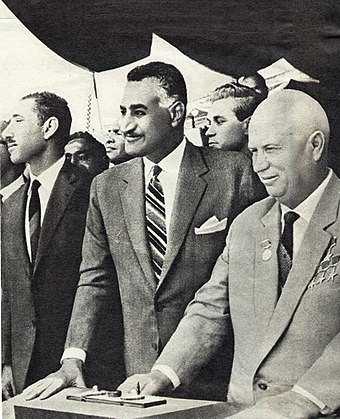 On this day in 1964, Soviet leader Nikita Khrushchev visited Egypt.

During the visit, President Gamal Abdul Nasser of Egypt and Soviet leader Khrushchev marked the first stage in the building of the Aswan High Dam.

At a dramatic ceremony in southern Egypt, the two heads of state together, along with President Arif of Iraq and President Sallal of Yemen, pressed a button to blow up a huge sand barrage and divert the ancient River Nile into a canal, allowing the next stage of the Dam to begin.

The dam has been financed and built with Russian help and thousands of cheering Egyptian and Russian construction workers witnessed great columns of sand shoot up into the air, followed by a cascade of muddy Nile water swirl through a manmade channel.

Standing alongside the presidents of Egypt, Iraq and Yemen on a platform above the 300-foot gorge, Mr Khrushchev said the dam should be called “the eighth wonder of the world”.

Referring to the United States’ refusal to fund the dam back in 1956, President Nasser said “reactionary powers” had conspired to prevent the building of the dam but that Egyptian and Russian solidarity had overcome all obstacles.

In a barely veiled attack on Britain, France and the United States, he said all traces of imperialism should be wiped out from the region by getting rid of military bases, multinational companies and foreign missionaries.

The project, due to be completed in four years’ time, will increase arable land in Egypt by one third, more than double its current power resources, add £200m to the national income and create the world’s largest man-made lake – Lake Nasser.

328: Athanasius is elected Patriarch bishop of Alexandria.
1788: British parliament accepts abolition of the slave trade.
1936: Italy takes Addis Abba, annexing Absynnia (Ethiopia).
1943: 5th German Panzer army surrenders in Tunisia.
1960: Nigeria becomes a member of the British Commonwealth.
1995: Kinshasa, Zaire under quarantine after an outbreak of the Ebola virus.
2009: Jacob Zuma is sworn in as President of South Africa.
2018: Dam bursts after heavy rains near Solai, Kenya, killing at least 41.
2019: At least 65 migrants drown off the coast of Tunisia when their boat capsizes after leaving Libya according to the UN.