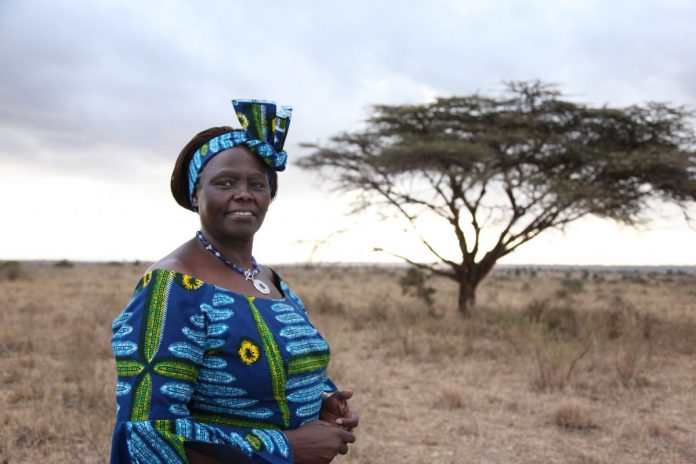 On this day in 2011, Wangari Maathai, Kenyan environmentalist and political activist, founder of the Green Belt Movement, recipient of the Nobel Peace Prize (2004) and Indira Gandhi Peace Prize (2006), dies from ovarian cancer at 71.

A towering figure in Kenya, Maathai was renowned as a fearless social activist and an environmental crusader. Her Green Belt Movement, which she founded in 1977, planted tens of millions of trees.

Maathai’s death was confirmed in a statement on the movement’s website.

“It is with great sadness that the family of Professor Wangari Maathai announces her passing away on 25 September 2011, at the Nairobi hospital, after a prolonged and bravely borne struggle with cancer. Her loved ones were with her at the time.”

Maathai was a pioneer from an early age and in many spheres. After winning a scholarship to study in the US, she returned to a newly independent Kenya, becoming the first woman in east and central Africa to obtain a PhD. Maathai was also the first woman professor at the University of Nairobi, where she taught veterinary medicine.

Her work with voluntary groups alerted her to the struggles of women in rural Kenya, and it quickly became her life’s cause. Noticing how the rapid environmental degradation was affecting women’s lives, she encouraged them to plant trees to ensure future supplies of firewood and to protect water sources and crops.

Maathai’s agenda quickly widened as she joined the struggle against the repressive and corrupt regime of Daniel Arap Moi. Her efforts to stop powerful politicians from grabbing land, especially forests, brought her into conflict with the authorities, and she was beaten and arrested numerous times. Her bravery and defiance made her a hero in Kenya.

In awarding Maathai the Nobel peace prize in 2004, the Nobel committee said that her “unique forms of action have contributed to drawing attention to political oppression – nationally and internationally”.

Maathai served as an assistant minister in President Mwai Kibaki’s government from 2003 to 2005, but her refusal to keep silent on some issues saw her politically sidelined, and she lost her seat after a single term. Her work schedule remained hectic, however, and she wrote several books and travelled widely.

Maathai had been in and out of hospital this year, though most Kenyans were unaware of her illness until it was reported in the local media late last week.

“Professor Maathai’s departure is untimely and a very great loss to all who knew her – as a mother, relative, co-worker, colleague, role model, and heroine; or who admired her determination to make the world a more peaceful, healthier, and better place,” the statement from her organisation said.

Maathai is survived by her three children and a granddaughter.

Somalia: Efforts to Resolve issues Between Somalia President and PM Underway in Mogadishu